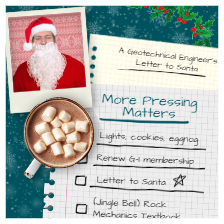 It has been well over two decades since I last wrote you, and I must apologize for neglecting this annual communique. In fact, it was only three days ago that I was lecturing the kids on the importance of sending Grandma a holiday card with the latest family photo and now here are, rightfully taking me to task for going incommunicado with the jolly ol’ fella at the North Pole. My sincerest apologies I send to you and – per Stephen’s request – to “Rudolph and the reindeer. Especially Olive, the Other Reindeer.” (Cindy and I showed him that classic Drew Barrymore animated movie for the first time last week on YouTube. He is now an Olive believer.)

We are currently sitting around the dining room table with pen and paper in hand, listening to “You’re A Mean One, Mr. Grinch” and writing out our lists. I asked if I could merely supervise the kids’ work and offer spelling suggestions, but Laura told me, “Daddy, you need new work clothes! Your pants are dirty!” Of course, I’ve got stain remover in gallons and I wash all my field clothes right when I get home, but that didn’t stop a new song from being written at the table. Like watching McCartney’s genius manifest in real-time during the Get Back documentary, Stephen led a melodic chorus: “Daddy’s got dirty pants, and he’s not allowed to dance, until he cleans those soiled pants!” Really cute stuff. I had to stop him from breaking out the toy guitar.

Now quiet has fallen over the table as my budding musicians turn their focus to the all-important items on their lists. I am reminding them to be realistic as Santa’s budget isn’t unlimited, and now I admit I find myself considering – Do I need new work pants?…It wouldn’t be a bad thing to add to the list:

And speaking of weather, Jeremy was telling me about those all-weather notebooks and they sound great for the rainy/snowy days in Western Pennsylvania. I think Santa can manage

Noticing my attention is no longer on their ever-expanding lists of Legos and plastic kitchen appliances, the kids are now taking an interest in my list. They say I have to “get geotechnical stuff” and I suppose they’re not entirely wrong this year.

I joke and tell them Santa might bring us all rocks this year, like Charlie Brown. Stephen shrewdly notes that Charlie Brown gets a rock for Halloween -- for Christmas he gets the silly tree! Silly me! We turn on “Jingle Bell Rock.”

Hmm. How about I put down one of those geologist’s rock sample kits? That might be fun to show the kids. We could go over the differences between pyrite and gold, they could be amazed by the lightness of pumice. Maybe more fun for me than them. But it makes the list!

Laura asks me what the one biggest and best gift for a geotechnical engineer would be. Cindy cuts in with, “Besides wonderful children and an adoring, supportive spouse who puts up with long stints of field work??” I don’t disagree, but I do have one miracle item to request, Father Christmas:

Yeah, that’s what I really want this year. But… I suppose technology like that could put me out of a job. Is something like that ever going to exist? Note to self: ask Cindy how close we are to a robots-taking-over Terminator situation after the kids go to sleep.

Apologies for the digression, Mr. Kringle. It looks like Laura and Stephen are finishing up their lists and Cindy is going through the disorganized drawers to find stamps from a set that was definitely purchased for this same purpose last December. I wish him luck. But before I sign and seal my letter, I suppose I should attempt some professional networking, since I’ve clearly displayed my passion for the profession in this correspondence. Prepare for my sales pitch, Santa:

Is your toymaking factory in need of expansion? Do you require the services of a licensed professional engineer with years of experience to evaluate layers of permafrost for foundation suitability? Share your RFP with me and I will budget my hours for travel (by commissioned sleigh ride), labor (logging ice samples as “transparent, wet, sticks to tongue”), and report writing (can be formatted as a carol). Don’t leave this elf on a shelf! Hire me today!

P.S. I think I’ve been a pretty good engineer this year, if Santa can ignore the time I grouted Ryan’s boots solid as a (very funny) prank in South Dakota.

P.P.S. Cindy says the robots are getting smarter every day. You’ve seen “Blade Runner” right? Not a Christmas movie like “Die Hard,” but still a great watch.